A disconnect in the discussions about the future of law?

I was given the opportunity by Lawyers Weekly to attend my first National Summit of the Australasian Legal Practice Management Association, held in Sydney, 17-19 October.

Attending the Summit was an enjoyable and informative experience. I must thank Lawyers Weekly for the free pass to this fantastic event. The Summit as a whole exceeded my expectations and I walked away enriched and invigorated. Each of the sessions I attended was brilliant and the exhibitors were perfectly selected for the event.

The global economic realignment has hit the bottom-line of most firms and emerging technologies have simultaneously lowered the barriers to entry for competitors and enabled the creation of entirely new disruptive models of legal practice. 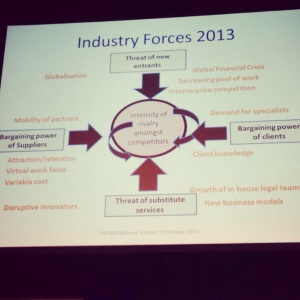 I sincerely hope I will be able to find my way to next year’s Summit in Melbourne. But for now, let’s return the focus to this year’s themes. I don’t propose to give a blow-by-blow description of each session, but rather focus on an interesting dichotomy I identified during the Summit.

There appeared to be two main themes. One focused on the climate of global economic realignment converging with a perfect technological storm that’s posing the most serious existential threat to law firms in centuries, termed the ‘new normal’ by a number of speakers. The global economic realignment has hit the bottom-line of most firms and emerging technologies have simultaneously lowered the barriers to entry for competitors and enabled the creation of entirely new disruptive models of legal practice.

The other focused on the ‘human’ factor, including the application of neuroscience in the commercial context in respect of both leadership and performance and productivity. This stream highlighted the innate desire and need of humans to perform at their best and the numerous biological ‘neuro-blocks’ that can prevent us from achieving that goal and what’s needed to try to overcome these obstacles.

I don’t believe there is any further doubt that law firms will have to make significant adjustments to their operations and strategies in order to adapt to the framework of the ‘new normal’ of increasing service expectations by clients and the simultaneous push for lower rates and a significant reduction in overall legal costs.

Speaker after speaker highlighted the environment of ‘new normal’ that law firms now operate in and noted that firms will have to revisit the manner in which they arrange and conduct their business, including:

Curiously in this context, but perhaps not entirely surprisingly, remote working and flexible working seem to have attracted little discussion, despite indicators that it can reduce costs and increase productivity.

On the other hand, law firms, and professional services firms generally, will have to consider the ‘human’ factor. It was highlighted at the Summit that the human brain is a complex mechanism, which science is just beginning to understand. However, we do know that the human brain is very sensitive, easily distracted and prone to insecurities and we have increasing evidence that certain environments are less conducive to a happy, healthy and productive workforce than others.

‘Collaboration’ has become the buzzword of the decade …

‘Collaboration’ has become the buzzword of the decade and while there is no denying that it has a significant role in any organisation, especially in the ‘new normal’, too much of it can have unintended, negative consequences. Further, an open space office is not necessarily the best method to achieve healthy collaboration, even if it’s the most economically attractive solution, because open space offices represent a potentially significant source of distraction, loss of valued privacy and stress and , consequently, reduced productivity and unhappy employees:

… the practice of law is a highly intellectual endeavour, requiring significant consideration, thought and focus.

While humans are heard animals by nature and seek out the company of other humans, which acts as a natural catalyst for collaboration, the human brain also naturally and actively seeks out peace, privacy, security and sameness, basic human needs not supported by open space offices. Further, the practice of law is a highly intellectual endeavour, requiring significant consideration, thought and focus. It’s hard to imagine how an open office environment could ever be facilitative of that process.

In light of the above, my conclusion is that open office spaces will not be conducive to productivity and health, and any savings that may flow from reduced floor space are likely to be lost to the discarded human factor. As I noted above, I am fascinated just how much remote working appears to be overlooked in this context. While growing evidence indicates that remote working is superior to open space offices from a health, general employee satisfaction and productivity perspective, it seems that most employers prefer unhappy, unproductive and stressed out employees just as long as they can ‘keep and eye on them’.

Setting aside the issue of open space offices, the idea of a flexible and modular workforce in the legal profession also throws up a myriad of even more significant issues, seemingly overlooked in the conversation:

To date, I have not seen a serious consideration of the above and many other ‘human’ issues that are likely to arise from the emerging structural changes to the business and operating models of law firms. If the profession is to effect reforms swiftly, in order to adapt to the global economic realignment, these and other issues that arise from the human perspective will need to be urgently highlighted and addressed.

After all, law firms and other professional services firms rely and depend upon the knowledge and intellectual output of their very human employees and where commercial reality collides with human biological limitations, something will have to give …