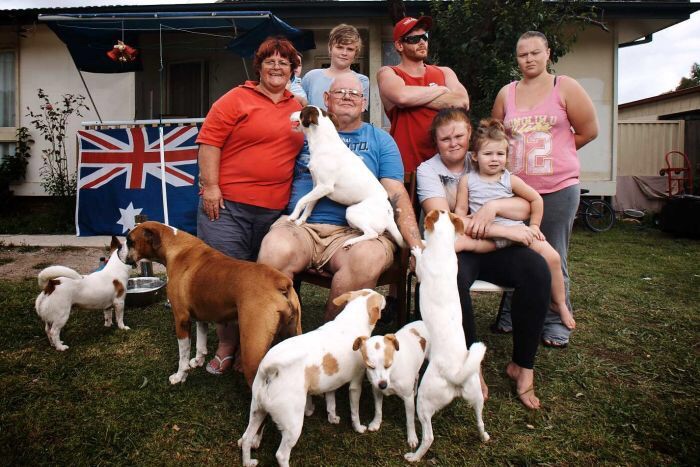 The real message of ‘Struggle Street’

SBS TV’s  ‘controversial’ three-part documentary, ‘Struggle Street’, has ruffled feathers even before it went to air last night. But for all the wrong reasons.

As Michael Lallo put it in The Sydney Morning Herald, ‘[w]hat we saw was a complex and nuanced look at how some people fall through the cracks. And how damn hard it is to climb back up when you don’t have the money, family, friends or education most of us take for granted … Struggle Street doesn’t attack or mock people in public housing. Nor does it paint everyone as a saint. Rather, it gives its subjects the dignity of portraying them as human’.

No doubt, some will be fixated on the references to drug use on the show, will point to that as the ’cause of all their problems’, and suggest drug use somehow makes them unworthy of help and support. But consider this, I suggest drug use is not the cause of their problems but just another symptom of their social disadvantage, poverty and health issues.

We have some serious issues to address as highlighted by Dr George Morgan of the University of Western Sydney, in his paper titled ‘A City of Two Tales: Distinction, Dispersal and Dissociation in Western Sydney‘:

The NSW government established Mt Druitt in 1966 as an area of public and private housing Within ten years the area 45,000 lived there (Peel, 2003: 45). Although from the outset the estate was a mixture of public and private housing (Dowling and Mee, 2000), its reputation is based on the popular stigmatisation of the large clusters of Housing Commission dwellings. Indeed Mt Druitt has so often been the focus of moral panics – youth riots, crime and violence, single mothers on welfare – that its name has almost become a metonym for social disadvantage (Peel: 17-21). Over the years various experts have been conscripted to ameliorate Mt Druitt’s problems and renovate its image. But as Peel wrote in his bittersweet study of Australian poverty The Lowest Rung, many locals who have witnessed past failures are cynical of these efforts and resentful of the missionary zeal and condescension of the social workers and researchers who descend upon them (Peel, 2003). When the Daily Telegraph newspaper sought to highlight the inequities in public education in the mid-nineties it ran a front page with a photograph of the graduating class from Mt Druitt High with the headline ‘The Class We Failed’ to highlight the poor results (Morgan and Davies, 2005). Any one of a number of schools could have been chosen for this purpose but the newspaper chose Mt Druitt because of the area’s notoriety.
…
In more recent times, the increasing affluence of many parts of the Western Suburbs has set up impulses towards social distinction in which Mt Druitt is represented not only, as in the past, as a dangerous and dysfunctional place, but as one of lowbrow taste and cultural mediocrity.
…
The area’s reputation weighs so heavily on locals that many feel like they live in a menagerie. This induces sullen resistance. Some seek to defend the area against stigma.
…
Others see little point in trying to defend the area from representations like these and will play out the stereotypes that entrap them, exaggerating their poverty and violence, presenting outsiders with the freak show they expect (Peel, 2003: 24-27).
…
The last fifty years has seen dramatic transformations of Western Sydney. Those involved in postwar reconstruction wished to extend to the deserving poor access to a way of life which to that point had been enjoyed largely by the middle classes. The broadacre suburb model was designed to relocate worthy families from the cramped dirty and disorderly streets of the inner-city and, as in much of the United States, profoundly reshaped Australian cities. Only those deemed good citizens were offered dwellings. However the decline in public funding for social housing and the growth in the numbers of those in need of it has meant that such housing now accommodates those who are most socially marginal. The newly prosperous owners of large homes on elite estates stare at those living in clusters of social housing across a widening gulf of wealth and social power. The latter endure reputations as rough/violent, supplicants of the welfare state, and lacking in cultural refinement. The recent response of the NSW government to what are widely viewed as ‘failed estates’ in Minto and Bonnyrigg has been to recruit private capital to redevelop those estates to create higher population densities and to profit from the land values. The social engineering agenda of modernist town planning remains firmly in place: better environments and neighbours will encourage social mobility and respectability. However, the structure of contemporary urban life means that residential propinquity is a less significant influence than it once was.

The Mayor of Blacktown would also be better advised to spend his time advocating at all levels of government for a focus on addressing income inequality, poverty, housing, and ever-increasing social immobility, and not wasting his time on calling for a commercial boycott of SBS.

The fleet of garbage trucks that blockaded the headquarters of SBS, misplaced their anger. They should have blockaded the State and Federal Parliaments instead, over their contribution to increasing income and social inequality in Australia.

There is no shame in poverty. Poverty, more often than not, is structural and generational and it is difficult, near impossible, to escape without a cultural and societal shift. Society should be ashamed. And don’t be fooled by that one in a million rags to riches story that’s pulled out by the media every once in a while. Such stories are just that, ‘one in a million’, just like winning the lottery, and they can’t be the basis of addressing poverty on a large-scale.

Residents should also be angry. But not with SBS, for shedding public light on the abject poverty hiding in the suburbs of the wealthy, flashy cities of our ‘lucky country’, but with the leaders and decision makers whose policies have created, and maintain, structural and generational poverty.

Shooting the messenger is an incredible waste of everyone’s time and will achieve nothing. Let’s choose the path less traveled, and actually try to do something tangible to genuinely improve the lives of impoverished Australians, instead of getting caught up in aimless public hysteria. For example, you could start by supporting community centres like the amazing Graceades Cottage, which serves the residents of Bidwillm, and the surrounding suburbs of Mt Druitt.

Pulling ‘Struggle Street’ off the air would do no favour for Mt Druitt, or the many other Australians living in poverty, either. It would simply sweep social disadvantage back under the carpet, so we won’t have to be confronted by the unpalatable reality of life for many of our fellow Australians.

If you don’t like, or are made uncomfortable by, what you see on SBS over the next three weeks, take action to make sure that Australia becomes a country of social justice and economic opportunity for all – the fair dinkum lucky country we would all like to believe we live in.

As for anyone who may consider saying anything even remotely unkind or hurtful about the people who feature on ‘Struggle Street’, I suggest you check yourself.

Watch Episode 1 of ‘Struggle Street’ on SBS On Demand.