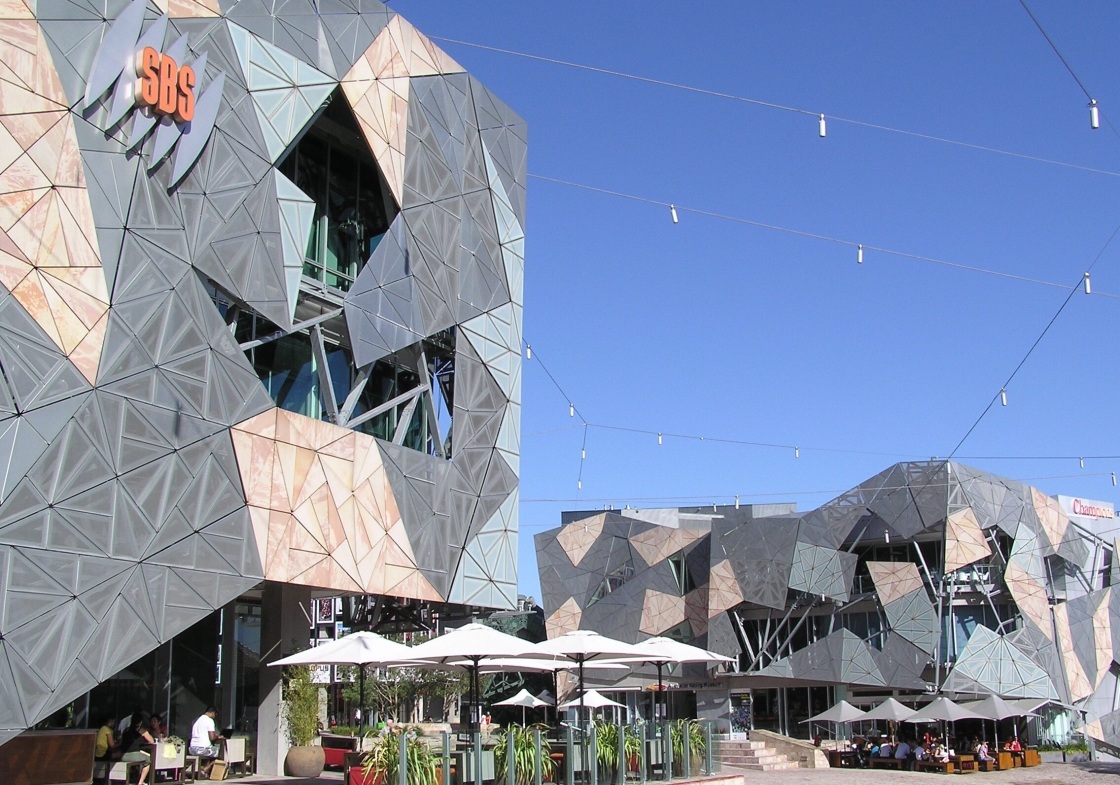 You may recall my recent review of social media developments, in which I detailed the sacking of Scott McIntyre in April by SBS over a series of controversial tweets he sent out on ANZAC Day and the consequent rage by some.

At the time it was unclear whether Mr McIntyre would take legal action over his sacking by SBS.

Mr McIntyre has now engaged the well-known plaintiff law firm Maurice Blackburn. If the case does go to judgment, it is likely to provide good guidance on the limits of public expressions of political opinions and staying employed in the age of social media.

They will argue his comments represented a political opinion, which is protected under section 351 of Part 3-1 of the Fair Work Act 2009 (Cth) (FWA).

(1) An employer must not take adverse action against a person who is an employee, or prospective employee, of the employer because of the person’s race, colour, sex, sexual orientation, age, physical or mental disability, marital status, family or carer’s responsibilities, pregnancy, religion, political opinion, national extraction or social origin.
… 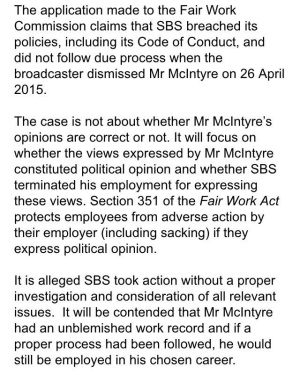 The media release indicates Maurice Blackburn will focus on whether ‘the views expressed by Mr McIntyre constituted political opinion and whether SBS terminated his employment for expressing these views’, noting that the ‘correctness’ of those opinions is irrelevant.

According to the media release, the management of the investigation into Mr McIntyre’s relevant conduct, and his consequent firing, will also be examined. Interestingly, this aspect does not appear to be relevant to a s351 claim and would usually be raised in unfair dismissal cases.

This will be an interesting case, if it does go to trial, because it has shades of Banerji v Bowles [2013] FCCA 1052.

I wrote about that high-profile case in my review of the interaction of social media and the law earlier this year. The case involved a public servant and her Twitter account ‘@LALegale’, which she used to critically comment on her employer, the Department of Immigration and Citizenship which led to a recommendation that she be terminated from her position.

Consequently, it was submitted that the tweets were posted on her own time and out of work and that any disciplinary action would infringe upon her constitutionally protected right to engage in political communication. The Federal Circuit Court of Australia rejected this argument and found that even if there is a constitutional right of such nature ‘it does not provide a licence … to breach a contract of employment.’

In the Banerji case, the issue was argued on the basis of an implied constitutionally protected right to engage in political communication and s351 of the FWA was not engaged.

Section 351 makes it unlawful for an employer to take adverse action against an employee on the basis of a range of attributes, including ‘political opinion’, except where the inherent requirements of the particular position are concerned. It is unclear whether Mr McIntyre’s ANZAC Day tweets would fall within the scope of political opinion under s351, but I’m inclined to think that they probably would.

‘Inherent requirements’ mean meeting baseline requirements, such as having the skills required and the ability to perform tasks essential to the position. It is unlikely in this case the inherent requirements exception would arise to help SBS, if Mr McIntyre’s tweets are found to be political opinion.

In the past, under various anti-discrimination laws, ‘political opinion’, and ‘political conviction’, have been interpreted to mean:

More recently, in Sayed v Construction, Forestry, Mining and Energy Union [2015] FCA 27, the Federal Court of Australia held the termination of Mr Sayed, on the ground he was an active member of the Socialist Alliance prior to commencing his employment, a breach of the ‘political opinion’ provision of s351.

If the tweets are found to fall within the scope of political opinion, an argument by SBS is likely to be that Mr McIntyre wasn’t dismissed by SBS for holding a particular political opinion, but his expression of it, particularly the timing and the specific wording employed, in breach of the broadcaster’s Code of Conduct and social media policy. Such an argument could be considered contrary to the protection intended to be provided s351. However, a similar argument was successful in the High Court of Australia recently in Construction, Forestry, Mining and Energy Union v BHP Coal Pty Ltd [2014] HCA 41, where the court found that BHP validly dismissed an employee for holding an ‘anti-scab’ sign on a picket line. While the activity itself was lawful industrial activity, also protected under Part 3-1 of the FWA, the court accepted that BHP did not dismiss the employee for the activity, but over his disregard for, and breach of, relevant workplace policies.

An even bigger issue with the s351 claim is that it remains unclear to me how such an argument could play out at all, because under subsection 351(2)(a) the relevant prohibition does not apply if the adverse action in question is ‘not unlawful under any anti-discrimination law in force in the place where the action is taken’ and, under NSW anti-discrimination legislation, discrimination on the basis of political opinion is not unlawful in NSW.

The McIntyre claim will now be subject to a conciliation conference in the Fair Work Commission. If the parties can’t reach a settlement the matter will then proceed to arbitration or trial.

mUmBRELLA reports initial discussions between the parties to settle the matter had failed.

Although the Fair Work Commission confirmed a confidential meeting between the parties had taken place, no further details have been revealed. However, it is understood that the matter remains unresolved.