Wear it Purple, wear it proud!

Unfortunately, this year’s Wear it Purple Day preparations were marred by the arguably unconscionable actions of that bastion of ‘journalistic’ integrity, The Daily Telegraph and the knee-jerk reaction of the NSW government. But more on that below.

Wear it Purple is a youth-based grassroots community organisation devoted to achieving a ‘world in which every young person can thrive, irrelevant of sex, sexuality or gender identity.’

Wear it Purple works to ensure ‘rainbow young people’ are ‘safe, supported and empowered in each of their environments.’ Amen to that!

On Wear it Purple Day you are encouraged to wear purple items of clothing to display your support for LGBTI youth.

You can also check whether your place of education or work will hold an event connected to Wear it Purple Day and show your support by participating. If nothing has been planned, it’s too late for this year but, why not take the initiative and make plans for an event next year!

You can also provide financial support to Wear it Purple by making a donation or visiting their online shop for some funky purple wears.

Another very practical way to provide long-term help to LGBTI youth is by supporting the Safe Schools Coalition Australia (SSCA).

The SSCA is a national organisation dedicated to helping schools be safer and more inclusive for same-sex attracted, intersex and gender diverse students, school staff and families. They are dedicated to creating environments where all students, teachers and families can feel safe and be themselves.

Among the many services the SSCA provides perhaps the most important is the resources and support they provide for young people who want to create positive change in their schools and need support to do so. They enable and support such students to organise activities, events and groups, such as gay-straight alliances, in their schools to actively challenge homophobia and transphobia and create the kind of culture that nurtures and supports all students, regardless of their sexuality and gender identity. This is known as the Safe Schools program.

Among many other organisations, Beyond Blue, Australia’s leading mental health support organisation, works closely with the SSCA because they identified the significant effects homophobic and transphobic bullying has on the mental health of the LGBTI community, including LGBTI youth.

Homosexuality does not cause mental health problems – bullying, homophobia, transphobia, social exclusion and anti-LGBTI violence does.

The Safe Schools program is in need of support because the SSCA is under attack from organisations such as the Australian Christian Lobby (ACL), a well-known religious anti-LGBTI organisation, who accuse the anti-bullying program of promoting ‘radical sexual experimentation’, by encouraging the acceptance of gender and sexual diverse children. Organisations such as the ACL tend to deny even the existence of transgender people and consider the concept a mere social construct, which is perhaps one of the most psychologically harmful approach to transgender children.

Family Voice Australia, another Christian lobby group, has also been targeting the SSCA.

Conservative mainstream media can play a significant role in the bullying of LGBTI youth as well. We were reminded of this on Wednesday, when The Daily Telegraph took aim on its front page at the planned Wear it Purple Day event at Burwood Girls High School. The event would have included the screening of ‘Gayby Baby‘, a new documentary film by Burwood Girls High alumni, Maya Newell. The documentary runs for 1 hour and 25 minutes and it is PG rated.

Well, The Daily Telegraph was not having it. Even though parents were notified in writing, and students offered the option not to attend this special screening and study in the library instead, the paper went into full hysteria mode over the one-off special event. They managed to find a concerned parent to quote, anonymously of course, and a disapproving … Presbyterian Minister.

The Presbyterian Minister, Mark Powell, agreed to speak to The Project on Channel 10 later on Wednesday evening. He was interviewed together with Alex Greenwich, an openly gay Member of the NSW Legislative Assembly.

Mr Powell was aggressive and disrespectful, and the interview did not reflect well on him personally or the Presbyterian Church as a organisation.

Mr Powell admitted not having seen the movie in question.

It just beggars belief he helped manufacture such an uproar over a movie he has not even seen. That admission betrayed his ignorance, and suggests his objection was not really to the screening of the movie, but to the very existence of Wear it Purple Day, which is designed to give an opportunity for students to embrace and support fellow LGBTI kids. This attitude was further betrayed by the soundbite he repeated in the course of the interview about girls being ‘forced’ to ‘wear certain [purple] clothes, eat purple cupcakes and parade under the rainbow flag.’ He had the gall to call the proposed screening of a documentary, designed to educate, and encourage acceptance and tolerance, ‘the victimisation and intimidation of young vulnerable people in our schools,’ and referred to the SSCA as a ‘gay lobby.’

He also spoke about ‘heaps’ of girls running to him crying about the matter, but quite disingenuously refused to give a number when pressed. He attempted to deflect the question by saying that the number was higher than the number of girls who identify LGBTI at the school. That answer, beyond his underlying statement being incredibly sexist, is entirely irrelevant given this is a broader social justice issue which is not bound by the fences of the school. In any event, I do wonder how he would know how many girls identify LGBTI at Burwood Girls High School? Given his attitude, I don’t see many of those girls confiding in him …

It’s not entirely clear how many parents objected to the screening, but indications are it may have been a handful at best, in a school with 1,200 students. It also appears The Daily Telegraph was the only recipient of objections. It was later confirmed by the NSW Department of Education that no parent had objected to the school or the department about the screening.

Two parents at the school, Cath Sefton and Kerry, who spoke to The Guardian Australia, had no objections and Cath Sefton called the matter a ‘total beatup’. Kerry even noted that on Monday the school received a visit from Foreign Minister, Julie Bishop during class time:

If they gave up time to hear from Julie Bishop, I’d be delighted for them to give up time to see this film too.

And what did the students think?! 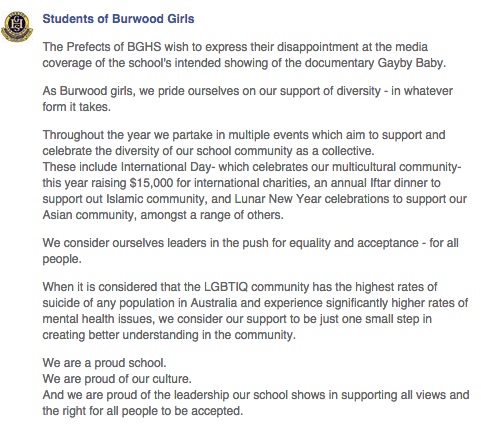 Parents, and the school’s alumni, responded to this post on the Students of Burwood Girls Facebook page by an overwhelming offer of support for all to see.

The whole affair has the stench of a stitch-up by The Daily Telegraph and the newspaper, and its editorial staff, should be ashamed of themselves.

But The Daily Telegraph didn’t stop there. The paper largely devoted its daily editorial to the story, wrongly claiming that students would have been ‘required’ to watch the documentary and stating that ‘children in their most impressionable years [should not be] brainwashed with propaganda.’ Perhaps they should have a chat with that Presbyterian Minister they spoke to, and all other ministers of religion, about that one …

The king of odious journalism, columnist Piers Akerman also chimed in with a delightful opinion piece titled ‘Gay push should be kept out of schools‘, in which he proceeded to tell the principal of the school that she ‘failed the parents of her pupils by embracing political propagandists who have seized her school’s agenda.’ This 65 years old giant of journalism then valiantly went on to tell a 12 years old girl, who is one of the children who appear in the documentary:

Statistically, you are not in a “normal” family, no matter how many LGBTIQ-friendly docos you may be forced to watch by politically-driven school principals.

In its desperation to justify its questionable actions, The Daily Telegraph referenced Federal Member of Parliament Craig Laundy having been ‘inundated with calls from parents and community representatives concerned about the planned screening of the controversial gay parenting movie Gayby Baby at Burwood Girls High School.’

Again, as in the case of Presbyterian Minister Mark Powell’s definition of ‘heaps’, there were no indications how many calls Mr Laundy considered being ‘inundated’. Given the recent display of questionable judgment at his electoral office regarding an envelope filled with glitter, sent by the community organisation GetUp!, which involved inviting a full-scale emergency services response complete with six police cars, six fire trucks and a hazmat unit, and then boasting about it on Facebook, I am justifiably sceptical.

It is also of some relevance in the context that Mr Laundy is a staunch Catholic conservative, and a self-described strong supporter of ‘traditional marriage’.

Needless to say, the Wear it Purple Day event will not go ahead today at Burwood Girls High School as planned. The NSW Education Minister, Adrian Piccoli had quickly intervened and banned the showing of the documentary during school hours. The NSW Premier, Mike Baird saw it fit to defend the ban.

I can only presume this NSW government edict is the end of any future visits by politicians to NSW schools during school hours, so something positive may come of this farce after all.

The few parents who may have been involved in this sorry saga should bow their heads in shame. They, together with The Daily Telegraph, NSW Education Minister Adrian Piccoli, the Department of Education and Premier Mike Baird, owe a hell of an apology to the school, its principal, staff and all the students who worked tirelessly to make Wear it Purple Day happen at their school only to see it ruined by small-minded hateful bigots and their appeasers.

Let’s make this clear, in a liberal, secular democracy the equality and human rights of a minority are never a ‘political agenda’ or ‘propaganda’. Neither is the presentation of the factual complexities and realities of modern life. That’s an education.

Sadly, it’s always the usual suspects who stand in the way of equality, human rights and support for LGBTI people. Even though all they have is hyperbole, innuendo and fear-mongering, for reasons unexplained, these organisations have access to the highest corridors of power.

Recently the Safe Schools program was gagged by the Federal government from speaking out in support of marriage equality, a key component in the fight for equality by the LGBTI community, and an issue that a growing body of research links with both the physical and mental health of the LGBTI community.

The government has been reported to have warned the SSCA against commenting on the ‘politically sensitive issue’ of marriage equality.

It has also been highlighted by experts that the Safe Schools program is incompatible with the government’s controversial National School Chaplaincy Program, given a number of approved providers have been linked to homophobic, anti-LGBTI views.

This is why your ongoing support for the LGBTI community and LGBTI youth, including the Safe Schools program championed by the SSCA, is so critical.

So, Wear it Purple, and wear it proud!

Brilliant reaction to the NSW controversy

The reaction from the Premier of Victoria, Daniel Andrews to the NSW government ban: