Leadership, representative democracy and the separation of church and state 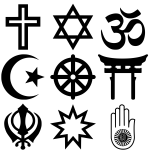 As Australians elect members of Parliament to represent them, Australia can also be characterised a representative democracy.

To further complicate matters, our executive government, the Cabinet and the Ministry, is drawn from, and accountable to, the elected legislative branch. This system is also known as responsible government.

The doctrine of separation of church and state adds a further layer of complexity to Australia’s political system, especially when there is a much higher level of religiousness in our government than in the general population.

The nature of our government raises difficult cultural, philosophical, political and social questions as to whether elected representatives should:

At the last Federal election, our now Prime Minister, Tony Abbott’s devout Catholicism was a matter of public discussion and became a growing liability. His political track-record amply illustrates an undeniable influence by that personal religious belief on his decisions as an elected representative. In order to defuse the issue, prior to the election he denied his personal religious beliefs would influence his government. It is a complicating factor in current politics that Tony Abbott is surrounded by like-minded Coalition members, with strong, in some cases arguably verging on the extremist, religious views.

The religious influence on our government surfaced with a vengeance during the recent marriage equality debate, leaving no one in doubt the role religion played in that decision.

This episode in Australian politics:

However, the influence of religion in Australian politics goes well beyond the issue of marriage equality and encompasses many significant social issues from euthanasia to religious education in public schools, and continuing attacks on women’s rights, including their reproductive rights.

It would appear the Coalition is very much aware of the disconnect between the government and the public, especially after the recent marriage equality fiasco, but prefers to downplay and ignore it. This uneasy mix of awareness and ignorance is on display in the Canning by-election.

The Liberal candidate for the Canning by-election, Andrew Hastie appears to have been produced on a 3D printer to Tony Abbott’s own unique specifications:

The Australian already caught up with Mr Hastie back in 2006 when he was a final-term cadet at the Royal Military College of Duntroon:

I saw 9/11 come around and I was really inspired by that and by the campaign in Afghanistan. I’d really had an easy life up to then. There were all these armchair generals at the university, not offering any solutions, just criticism. I saw a lot of potential for a soldier to make a difference.

I’d really like to get over to Afghanistan, better as a soldier than a journalist. I joined the army to deploy. I’m also a Christian and find my faith gives me a lot of strength.

I feel more at home in the military than I did at UNSW. Here people respect your beliefs, they don’t attack them. Provided you live out the values you express, that’s OK.
Cadets rise to challenge (The Australian, 23 September 2006)

After nine years in the army he resigned this year to contest the Canning by-election, following a two-year internal Defence Force investigation into events that occurred in Afghanistan. Mr Hastie was cleared of any wrongdoing in the matter, which involved chopping the hands off dead Taliban fighters in Afghanistan for ‘for the purposes of identifying them by fingerprinting,’ by troops serving under his command. The matter was explained to the media noting ‘[t]he principle of military necessity says in extreme circumstances that if there is no alternative you have to do things like this.’

Mr Hastie also spoke of being ‘on the ground’, and soldiers under his command being in contact with a US Apache helicopter, when two Afghan boys were killed by the crew in 2013, but noted he and his men were, again, fully cleared of any blame. Another ‘very, very sad and tragic consequence of war,’ according to Mr Hastie.

Despite proudly announcing his Christianity to The Australian in 2006 and again earlier this year when he introduced himself to the Liberal Party’s West Australian state council meeting, recently he became more guarded about his religious views.

Although he made his opposition to marriage equality known, he now told the media he would not answer any questions about his faith, or family, and he referred to such questions as the media ‘coming after’ his family.

This sudden ‘shyness’ about religion and family is not surprising given recent revelations about his wife and father.

… a Christian cannot receive homosexual desires and embrace homosexual practice as good and holy things. Neither can a Christian say that being gay is just as fundamental to who I am as being in Christ. Christians are called instead to ‘flee from sexual immorality’ (1 Cor 6:18), and to understand themselves first and foremost as a redeemed person in Christ.
From Ben: Can I be a Christian and homosexual? (an extract from the paper given last Monday night) Written by Ruth Hastie (22 November 2013)

Mr Hastie explained the matter by noting his wife was not the author of the piece, she merely uploaded it. Nevertheless, I presume she would not have uploaded such material if she did not agree with its content, especially given her name is attached. It’s also important to recognise that the views expressed by the blog post sit outside scientific, social and mainstream Australian understandings of homosexuality.

Mr Hastie’s father is the Reverend Peter Hastie. That name reverberates around Australia, both inside and outside Presbyterian circles, and it is associated with very traditional religious views, and one of the most controversial events in the Presbyterian Church’s history.

Reverend Hastie is Principal and Pastoral Dean at the Presbyterian Theological College.

His online presence at Creation Ministries International indicates he’s likely a creationist who believes the Earth is 6,000 years old, and rejects the theory of evolution.

He is also believed to have been behind the March 1993 heresy conviction of fellow Presbyterian Minister Peter Cameron, over a sermon a year earlier in which Cameron had supported the ordination of women, criticised the church’s hard line on homosexuality and questioned its fundamentalism.

Read together, these examples create the impression of a very religious family, that’s on the outliers of our modern Australian society, and represents a very small minority. While these views are very much out of line with mainstream Australia, they are very much in line with the views of our religiously overrepresented Coalition government.

Given marriage equality has become one of the biggest political issues of 2015,  the voters of Canning, and the Australian public, have a right to know Mr Hastie’s views on homosexuality and marriage equality, and how those views are coloured by his religious beliefs.

We have the right to know whether those views will influence how he casts his votes in Parliament. Will he vote to represent his electorate, or to support good public policy for the betterment of our liberal, secular democracy, or will he vote to advance a Christian political agenda in line with his personal beliefs?

Mr Hastie responded to media questions on the subject by stating he’s not interested in ‘questions of theology,’ although it would appear his entire life contradicts that statement:

For many people of religion their faith and questions of theology, which can determine what they believe to be right or wrong, and immoral or moral, are at the very heart of who they are. Consequently, voters should be fully informed about a political candidate’s religious views and affiliations.

In a recently released book titled ‘Sacred to Secular,’ Brian R. Morris notes ‘it’s time it also became mandatory for MPs to publicly state the extent of their religious activities, and place them on the public record …’

However, I am concerned by the likelihood he will be unable to separate his personal faith from his role as an elected Member of Parliament in our progressive, liberal, secular democracy, especially when those personal religious beliefs are on the more extreme end of the spectrum, and completely out of line with society, science and our understanding of the world. And that’s a legitimate concern he must address.

Mr Hastie and other elected representatives must accept that when they are sitting and voting in Parliament, they are not representing ‘god’ or the moral principles of their respective religious faiths, but the people of Australia … all of them.