I was growing tired of Kim Davis and ready to move on, but recently she went on a publicity drive and made a lot of particularly ignorant remarks, which I feel compelled to discuss.

On Monday, she gave an interview to ABC News in which, while shedding crocodile-tears, she mumbled about the ‘devil.’ For a person, as she says, ‘touched by the grace of god, his mercy,’ the interview reveals an appallingly ignorant and sanctimonious human being. 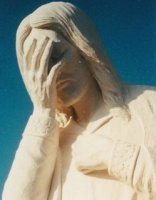 The interviewer started strong by pointing out to her that she has been married four times, had children from an adulterous relationship, and asked how she manages to reconcile those facts with her current stance.

‘I’m forgiven, washed clean,’ was her convenient, and in her mind completely non-hypocritical, response following her recent conversion to Christianity.

‘The main authority that rules my life is the lord,’ Kim Davis goes on to say as she rejects the marriage equality ruling of the Supreme Court of the United States, the arbiter of the US Constitution, and the highest judicial authority in the country.

In the interview she says she wants to remain in her position because she’s ‘good at’ her job, failing to see the irony in making such a statement while … refusing to do her job.

Kim Davis, who apparently has gay and lesbian friends(?!), said she had denied them marriage licenses too, but that’s okay because ‘they respect each other.’ She insisted she can’t put her ‘name on a license that doesn’t represent what God ordained marriage to be.’ Which would be an ‘understandable,’ and even wise, position to take if you were living under the mullahs of Iran, or the Islamist regime of ISIS, but not in a liberal, secular democracy in which the separation of church and state is a fundamental principle.

I wonder what the public would think of a public servant who relied on their deeply held religious belief to deny issuing marriage licenses to interracial couples, or driver licenses to women, or granting divorces?

Sadly she is being encouraged by ‘thousands’ of others who clearly hold the same view. A frightening realisation, that religious fundamentalists, no matter what religion, have no regard for the principles of secular democracy.

Next the interviewer noted that she continues to refuse to issue marriage licenses and her Deputy Clerks have been tasked with doing so instead, which raises some questions about their validity.

Earlier, her lawyer also queried the validity of marriage licenses issued while she was incarcerated, and since her release and return to work.

Further concerns have been raised over alterations made to the format of the marriage licenses by Kim Davis upon her return to work. The new format has her name and the name of the county removed and says they are not issued under the authority of the county clerk, but ‘pursuant to federal court order.’ A condition of her release after being jailed for contempt was that she would not interfere in any way, directly or indirectly, with the efforts of her deputies to issue marriage licences to all legally eligible couples.

While both the Governor and Attorney General of Kentucky are of the view the marriage licenses are valid, due to the lingering uncertainties reinforced time and time again by Kim Davis and her lawyer, the American Civil Liberties Union of Kentucky filed a motion in the District Court to clarify the situation. They are asking for an order that marriage licenses be issued in the usual format, and for the reissue of those licenses which were given in the altered format.

To date there has been no legal challenge to the validity of the recent marriage licenses issued from the Rowan County Clerk’s Office.

Kim Davis, herself married four times, went on to wonder why that little piece of paper is so important to the gays, and wondered why on earth denying it to them would have any effect on their self-esteem?!

She is correct in saying the US Constitution does not guarantee ‘dignity.’ But, it doesn’t need to – our common decency and humanity are supposed to do that. Dignity is something we afford to our fellow human beings by treating them with respect, and by doing so we uphold our own decency and dignity.

By her actions Kim Davis demeans others, and herself.

However, Section 1 of Article III of the US Constitution does provide that ‘judicial Power of the United States, shall be vested in one supreme Court, and in such inferior Courts as the Congress may from time to time ordain and establish,’ and Section 2 says that ‘[t]he judicial Power shall extend to all Cases, in Law and Equity, arising under this Constitution, the Laws of the United States, and Treaties made, or which shall be made, under their Authority …’ (emphasis added)

This makes the Supreme Court of the United States the ultimate arbiter of the US Constitution, and it has done just that in finding marriage equality a constitutional right.

And if there is any confusion about the ‘Christian foundations’ of the US, while the First Amendment protects the ‘free exercise’ of religion, it is also emphatic that Congress must not ‘make … law respecting an establishment of religion.’

The original text proposed by James Madison, one of the Founding Fathers of the United States, is informative of the intentions of the First Amendment: ‘The civil rights of none shall be abridged on account of religious belief or worship, nor shall any national religion be established, nor shall the full and equal rights of conscience be in any manner, or on any pretence, infringed.’ During the debate, Madison told his fellow Members ‘he apprehended the meaning of the words to be, that Congress should not establish a religion, and enforce the legal observation of it by law, nor compel men to worship God in any manner contrary to their conscience.’ A most eloquent expression of the separation of church and state.

Given what we know about them, the Founding Fathers would likely be troubled by the use of religious liberty arguments to erode democracy, personal liberties, and the separation of church and state, which they enshrined in the foundations of the great nation they had created.

Historically, Christianity held a lot of sway in Western nations, and Christians were afforded many privileges. However, over the past century Western nations have undergone a fundamental social transformation. Our definitions of humanity, law and morality, and our understanding of science and the world around us, had advanced in leaps and bounds. Religiousness had decreased over the past few decades and there is an increasing non-religious element in society. This brings with it a very reasonable demand for freedom from religion by those who wish to live their lives free of the influence of organised religion and, inevitably, the sharing of the privileges Christians have enjoyed for centuries.

But blind faith is ignorance, with no room for reason.

Kim Davis is a product of a society that allowed a hypocritical, right-wing Christian sub-culture to develop, persist and thrive.

A Christian sub-culture which, for far too long, has been allowed to think it has the final word on human morality, and feels entitled to elevate their interpretation of ‘god’s law’ above the laws of our secular democracy.

Kim Davis is no Christian martyr – she’s a poster child for Christian privilege.

They are God’s frauds, cafeteria Christians who pick and choose which Bible verses they heed with less care than they exercise in selecting side orders for lunch. They are joined by religious rationalizers—fundamentalists who, unable to find Scripture supporting their biases and beliefs, twist phrases and modify translations to prove they are honoring the Bible’s words.
…
The Bible is not the book many American fundamentalists and political opportunists think it is, or more precisely, what they want it to be. Their lack of knowledge about the Bible is well established.
‘The Bible: So misunderstood it’s a sin,‘ Newsweek (23 December 2014)

Kim Davis believes herself to be filled with what she perceives to be god’s ‘wisdom.’ I have one piece of my own wisdom for Kim Davis: if you really believe you know ‘god’s plan’, please seek immediate, quality care. Others shouldn’t have to pay the price for your disturbed soul with their dignity, happiness and rights.

The ABC completed its Kim Davis trifecta on Nightline