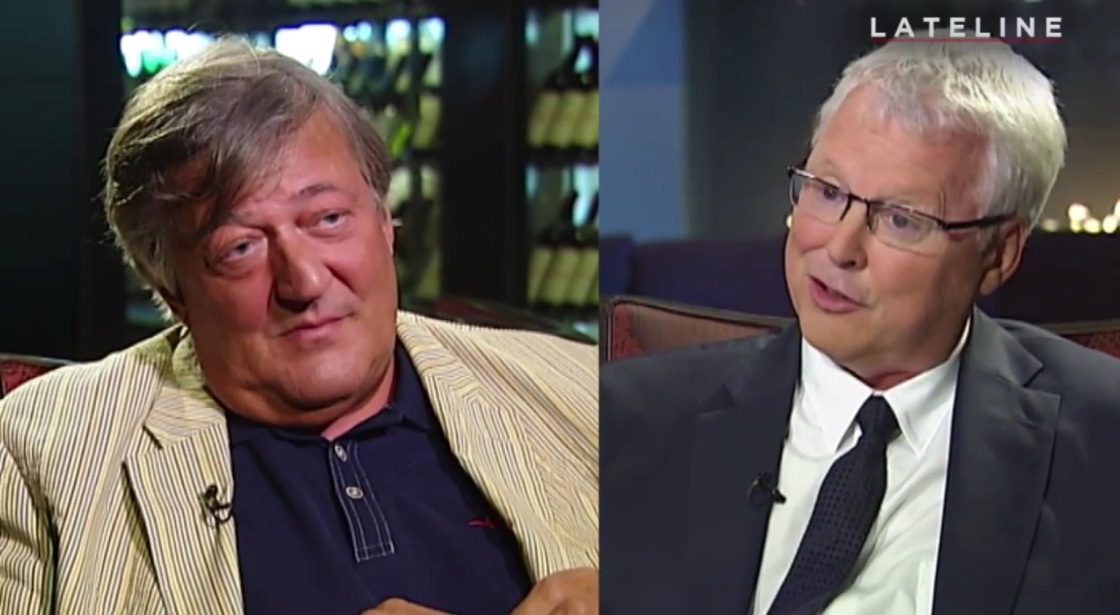 On Wednesday night Stephen Fry sat down with Tony Jones for a delightfully naughty and intellectually stimulating Lateline interview.

The two discussed a dizzying array of topics, from religion and god, to LGBTI rights, equality, sex, drugs, mental health and self-medication.

Thankfully, age and controversy shall never weary Fry, and he was at his articulate and utterly brilliant best.

It’s not the first time Fry had expressed himself frankly on the subject of religion, and a ‘capricious, mean-minded, stupid’ and ‘monstrous’ god – in an interview with Gay Byrne for The Meaning of Life he caused quite a stir with those comments.

There are a lot of upset people who do not care for Fry’s views on god. But a liberal, secular, democratic society which tolerates openly bigoted, homophobic and misogynist religious views, despite knowing better, is certainly capable of accommodating the contrary views of atheists and secularists.

Tony Jones asked him straight up whether he regrets those controversial comments, which resulted in a serious Christian backlash, but was outweighed by support from kindred spirits.

‘No, not in the least, because you see I don’t believe in god,’ responded Fry without missing a beat.

And one of the biggest errors that you can commit in our times, is to be honest if asked a question. And I was honest.
…
Especially oddly enough it’s gets you into trouble with ‘moral, religious’ people.
…
And I think, if there were a god, one of the things he would want us all to do as much as possible is for us to use this extraordinary instrument he has given men more than any other creature, and that is his ability to reason, reason deductively, inductively, and to try and understand and embrace the real complexities of reality. What he would not want us to do is to abandon our intelligence and just shout and scream and throw petrol bombs or the verbal equivalent of petrol bombs on Twitter.

Fry is unapologetic about his views, and sees it a feeble attempt by some to fill the gaps of scientific knowledge with religious belief and superstition, and talks about the ‘pleasure of finding things out.’

He addressed accusations of ‘islamophobia,’ by asserting he could also be called a ‘christianophobe’ then, in the sense that he is afraid of ‘fundamentalist violence, intolerance, ignorance.’

He also lamented how the so-called ‘intellectual left’ has become ‘so judgmental and so closed to reason and, in a sense, to liberal values’. Fry rather relates to Bertrand Russell’s philosophy which he sees as ‘liberal, secular, doubting.’

But Fry is also very clear about his view that people should be allowed to pursue their own religious path, without being subjected to intolerance and bigotry.

On the subject of marriage equality, Fry, who married his husband Elliott Spencer earlier this year, noted marriage has been an emotionally wonderful feeling for him and ‘very special.’

It’s silly, and yet it has a definite feel to it.

Fry also talked candidly about his own mental health issues, and how alcohol and recreational drugs are used by many who suffer from undiagnosed mental health conditions, as a kind of self-medication, to moderate otherwise uncontrollable and often significant emotional variations caused by mental illness.

However, Fry acknowledged the harm that can be caused by a cycle of self-medication with alcohol and illicit drugs.

Fry’s ‘controversial’ response on the subject of god, to Gay Byrne on The Meaning of Life: