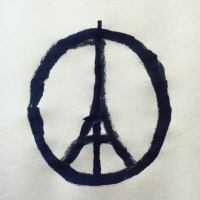 In the aftermath of the horrors that unfolded on Friday night, a conversation was captured on the streets of Paris by a journalist for Le Petit Journal, that will simultaneously break your heart and strengthen your spirit.

Their reporter was covering the reaction of Parisians to the terror that was unleashed upon them, when he came across a father and son paying their respects near the Bataclan, the worst scene of the Paris terror attacks, where at least 89 people were murdered and over 200 injured.

The exchange that followed sums up the best of humanity, and our best hope for the future, as a father reassures his young, concerned son that the flowers and candles left in the streets in response to the terrorist violence represent safety and protection from guns …