What a glorious warm and sunny autumn we are continuing to enjoy in Sydney this year! April was absolutely stunning, allowing Sydneysiders to get outside, and make the most of their city.

Nevertheless, the temperature is cooling now, and it’s the perfect time of the year for some whisky-based cocktails.

This month I will kick off with an Old Fashioned, a classic American whisky-based cocktail, dating back to the 19th century. The Old Fashioned is listed in ‘The Unforgettables’ category of the Official Cocktails of the International Bartenders Association.

This is an old favourite, and it has many variations around the world – one of the best locally is the Banana Old Fashioned at Gardel’s Bar, in Surry Hills in Sydney. Do yourself a favour during these coming winter months and treat yourself to one of Gardel’s Banana Old Fashioned. And while there, throw in a fabulous dinner at Porteño downstairs. But more about these two excellent establishments in an upcoming edition of Secret Sydney.

In the meantime, here is the version I make at home …

Method: drop the sugar cube into an old-fashioned tumbler-like glass, splash it with the Angostura bitters and a touch of club soda. Muddle the sugar cube, add a large cube of ice, pour in the rye whisky, and stir. It can be garnished with a twist of orange or a cocktail cherry.

* Use a good rye whisky and you will be rewarded. Some of the best options are Knob Creek Rye Whiskey, Bulleit Rye, Angel’s Envy Finished Rye, WhistlePig Straight Rye Whiskey, or, if none of those are available in your location, use Wild Turkey 101 Rye.

While you are enjoying your Old Fashioned, here are a few of my favourite tunes I am currently listening to …

Since the tragic and unexpected passing of Prince I have been reacquainting myself with his incredible catalogue of work.

Unfortunately, he notoriously refused to make his music available online, and he was also jokingly known as the Prince of Copyright Enforcement. Consequently, much of his music is not available online, unlike most other musical artists these days, and what’s available is often of questionable quality and origin …

‘Darling Nikki’ was track 5 on the famous Purple Rain soundtrack album. Like all other songs on the album, it was written, produced, arranged, composed, and performed by Prince.

The PMRC famously released the ‘Filthy Fiveteen‘, a list of fiveteen songs they considered too ‘filthy’ for young minds, with Prince’s ‘Darling Nikki’ topping the list.

‘When Doves Cry’ by Prince

‘When Doves Cry’ was the epic lead single on the Purple Rain soundtrack, yet it was written for the movie at the last minute. It was a huge hit, becoming the biggest selling single of 1984, and one of Prince’s ‘signature songs’.

‘Controversy’ was the lead single and title track to Prince’s 1981 album. The song initially baffled fans. The lyrics dealt with the growing public fascination with, and speculation about, Prince’s sexuality, gender, and religiosity.

I just can’t believe
All the things people say, controversy
Am I black or white?
Am I straight or gay? Controversy

Today it is deservedly recognised for the funk classic it is. Catching this number on the dance floor will lead to some serious boogying down …

‘Midnight in the Garden of Good and Evil’ by John Berendt 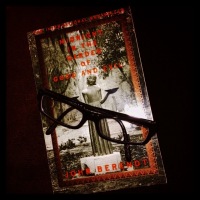 If you prefer a literary journey with your Old Fashioned, my choice this month is ‘Midnight in the garden of good and evil‘.

In March it was pushed back following the passing of Harper Lee in February, due to my desire to pay homage to her by revisiting the classic ‘To Kill a Mockingbird’.

Last month Madonna took over Sunday Life, in celebration of her first tour in Australia in 23 years, including a look at her controversial ‘Sex’ coffee table book – admittedly more a pictorial than a literary journey.

Interestingly, ‘Midnight in the garden of good and evil’ has something in common with both of those books that bumped it. It is another Southern tale, like ‘To Kill a Mockingbird’, and the story line is not void of sexual themes, nor the book of a little controversy because of its subject matter.

‘Midnight in the garden of good and evil’ is a classic murder mystery in the deep south with twists and turns, and Lady Chablis. The story revolves around the death of a male prostitute, four subsequent murder trials, the last one resulting in an acquittal, and the fascinating, larger than life characters of Savannah, Georgia.

Did I mention the book is classified as non-fiction because it is based on real-life events that unfolded in the 1980s?