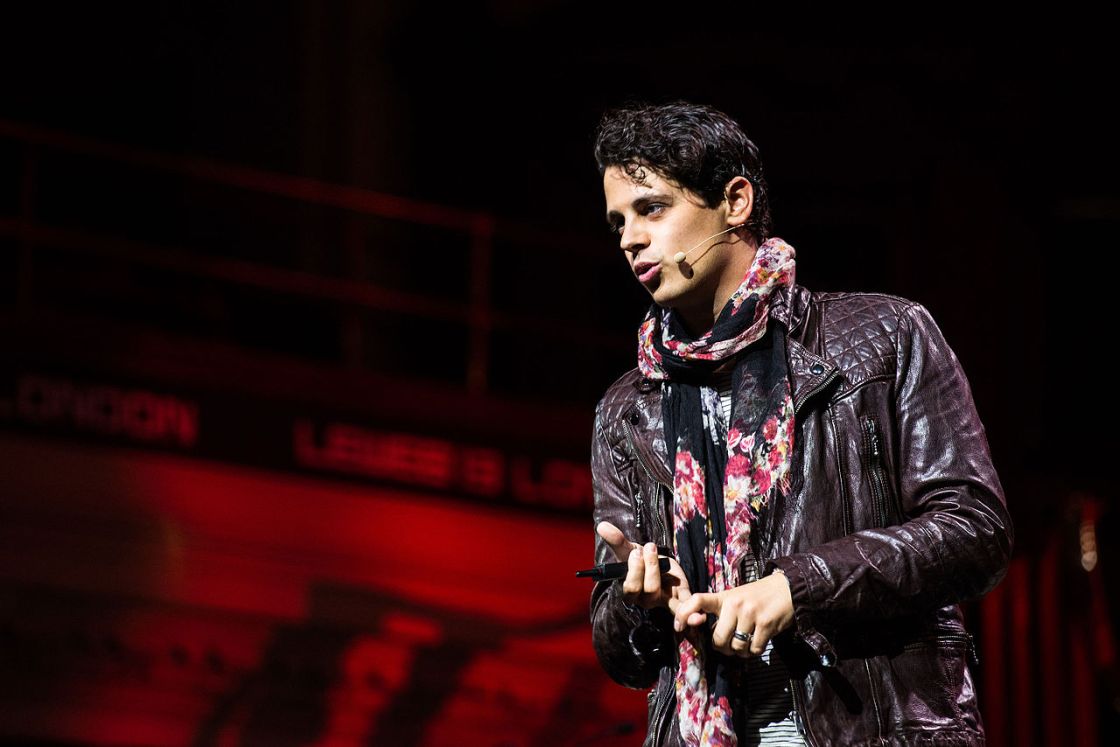 Free speech, the so-called ‘Alt-Right,’ and Milo Yiannopoulos, a.k.a. the ‘Dangerous Faggot’

I am experiencing what is tantamount to an intellectual crisis when it comes to reconciling my reverence for freedom of speech and ideas, the so-called ‘Alt-Right,’ and its poster boy Milo Yiannopoulos, especially following the recent disruption to his ‘The Dangerous Faggot Tour‘ (I think that title speaks for itself) at the University of California at Davis.

Milo is an unlikely poster boy for the so-called ‘Alt-Right‘ movement, fascism and white supremacism rebranded for a 21st century audience, because he is gay, half Jewish, although a practising Catholic, and half Greek. Many on the extreme right of his own movement reject him for these reasons.

Others in the ‘Alt-Right’ movement with a more strategic focus welcome him because strategically he offers them a great benefit, standing as a tool of propaganda, a living, breathing symbol of the denial of their ‘alleged’ hate of the ‘other’: Jews, gays, people of colour.

It may be counterintuitive that someone like him would be involved with such a despicable movement, but there is money and fame for the taking (and Milo does appear to love the limelight).

There is also historical precedent for some members of a minority targeted for harassment and discrimination to betray their own during times of upheaval and perceived danger, as a method of self-preservation and self-gratification.

It’s almost poetic … in its crassness and cruelness.

Milo worked hard over the past few years to establish his racist and misogynistic credentials, by supporting Donald Trump, becoming a writer for Breitbart News, a right-wing, far-right opinion site, taking a leading role in the Gamergate movement which focused on targeting women in gaming with abuse, and getting himself banned for life from Twitter over orchestrating the racist trolling of Leslie Jones, an African-American actress and comedian. Milo is the skilled puppetmaster of an ‘Alt-Right’ troll army.

I find Milo particularly fascinating because there are many uncanny similarities in our respective background: I am also gay, I was raised Catholic although now I am an atheist, practically half my family is Jewish, and while I pass for white with ease on the surface, deep down I am an eclectic mix of nationalities and ethnicities.

Yet, our ideologies could not be further apart: I am a proud secular, liberal progressive, and I abhor anti-Semitism, homophobia, misogyny, racism, and bigotry generally.

But I digress. Back to free speech and my intellectual dilemma.

Freedom of speech is of course fundamental to healthy liberal, progressive, and secular democracies.

But, while there are so-called ‘absolute rights’, freedom of speech is a right that arguably must have some ‘limitations,’ or responsibilities attached (ie. falsely shouting ‘fire’ in a crowded theatre), even if some see such a position hypocritical and intellectually flawed, and question where such a line could or should be drawn.

The ‘limitations’ are necessitated by human nature itself, in order to protect the exercise of the freedom, and to protect it from being co-opted by hate.

Informed debates, the discussion of ideas and concepts, and challenging the status quo without fear, are indispensable to human existence and progress. However, any speech that calls for, incites, or supports physical violence, or reasonable fear of physical violence, especially in response to someone else exercising their right of free speech, is unacceptable. Such speech is inherently antithetical to the very concept of freedom of speech.

Whether speech calling for discrimination or exclusion, infused with bigotry, hatred and prejudice, such as homophobia, misogyny or racism (but falling short of calling for, inciting, or supporting physical violence, or reasonable fear of physical violence), should be allowed is a vexed issue.

I stand firm for informed debates on issues, but would submit that homophobia, misogyny, racism, and other prejudices by their nature lack the ‘informed’ component.

An ‘opinion’ in the absence of evidence and facts to support it is usually nothing more than bigotry, hatred and prejudice and consequently it is arguable that no one is entitled to an opinion, especially when the opinion in question has no foundation in facts, or has been conclusively and inarguably debunked.

Thus it could be argued that you are only ‘entitled’ to what you can coherently argue and factually support.

This brings me back to Milo, white supremacism, fascism and their new public expression, the ‘Alt-Right’.

I will assert that white supremacism and fascism had permanently lost any veneer of ‘legitimacy’, and the ‘right’ to express their ‘ideology’ freely a long time ago. When it comes to fascism, I am even prepared to offer a date of when that happened: 9-10 November 1938 onwards.

I am sure that when humans were finally prevented from burning and drowning witches many felt their freedom of religion and expression was grievously abridged.

But some forms of expression and some concepts and ideas had proved themselves irretrievably evil, and an existential threat to peace, humanity, and our progress.

Our reverence for freedom of speech and expression of ideas cannot and must not be exploited and perverted to reanimate ideas rightfully confined to the graveyard of intellectually bankrupt and inherently evil concepts.

There may be an argument for discussing such matters from a historical perspective, in the appropriate academic context. Arguably, it would be different if Milo was having a public roundtable discussion with learned, respected academics who truly understand fascism, white supremacy, and anti-Semitism, who would no doubt destroy Milo’s ignorant and intellectually bankrupt fascination in no time.

But to spout these toxic, failed ideologies without context, rebuttal, or challenge, as a suggested model for organising our societies at the dawn of the 21st century, that’s just simply undesirable and unacceptable.

Of course, we can’t meaningfully discuss free speech without acknowledging the varying legal and cultural context across the world.

In the United States free speech is guaranteed by the First Amendment to the Constitution, which has achieved mythical status around the world, even though many misunderstand the substance of the right guaranteed under the text.

Congress shall make no law respecting an establishment of religion, or prohibiting the free exercise thereof; or abridging the freedom of speech, or of the press; or the right of the people peaceably to assemble, and to petition the Government for a redress of grievances.

There is a complex body of case law surrounding the First Amendment, but the critical distinction to remember is that the First Amendment does not offer ‘universal’ free speech protections – it only prohibits the government from interfering with the freedom of speech of citizens and the press, among other things.

This means, for example, that corporations and individuals, while may be subjected to a cultural backlash if and when they are perceived to be interfering with freedom of speech, are not the subject of the constitutional prohibition prescribed by the First Amendment.

We must also remember, that a guarantee of free speech alone, no matter how wide and culturally pervasive, won’t guarantee a healthy, functioning democracy and press – the recent election campaign in the United States amply demonstrated that conundrum.

This point is illustrated further by the fact that despite its proud freedom of speech culture, the United States ranks only in 41st place on the 2016 World Press Freedom Index*, beaten by Australia in 25th place despite the fact that our Constitution is silent on our right to free speech, and we only have a limited ‘implied’ freedom of political speech courtesy of the 1992 decision of the High Court of Australia in Nationwide News Pty Ltd v Wills and Australian Capital Television Pty Ltd v Commonwealth (ACTV) 177 CLR 1.

In Australia we have legal limitations on our freedom of speech. For example, discrimination and defamation laws prohibit, or at least make highly undesirable, certain types of speech.

Such laws are designed to strike a balance between our desire to express ourselves freely, and the less desirable manifestations of our human nature, such as bigotry, division, hate, homophobia, misogyny, racism, religious zealotry, and the like, which can lead to the abuse of the privilege of free speech, and undesirable, even dangerous, social outcomes.

As a modern, liberal, plural, progressive, secular society, Australia made an informed decision to curtail some forms of speech considered harmful, to encourage a cohesive and inclusive culture where our public discourse is not characterised by the lowest common denominators.

That’s a socially beneficial status quo worth defending, even if those driven by the lowest common denominators try to stir up a backlash against it every once in a while.

* The World Press Freedom Index takes into account matters such as pluralism, media independence, environment and self-censorship, the legislative framework, transparency, and infrastructure.