Fascism, Nazism, and white supremacy are only a ‘side’ to hate, ignorance, and humanity’s worst horrors

Make no mistake, fascism, Nazism, and white supremacy are only a ‘side’ to hate, ignorance, and human history’s worst horrors.

Lest there be any confusion about for whom Donald Trump, the President of the United States, spent four days now finding excuses.

It was organised fascist, Nazi, and white supremacist outsiders who descended on Charlottesville, Virginia, a small Southern town, where the city’s council, supported by its citizens, had voted to remove its statue of confederate General Robert E. Lee, erected in 1924.

While marching with flaming (tiki) torches, they were chanting ‘Jews will not replace us,’ and ‘Blood and soil,’ a phrase irretrievably linked to Nazi Germany, representing and ideology that focuses on ethnicity based on two factors, descent by blood and territory.

The next day they marched in the streets with confederate and Swastika flags, and symbols of white supremacy, chanting ‘F**k you fag**ts,’ with the occasional ‘Heil’ thrown in. 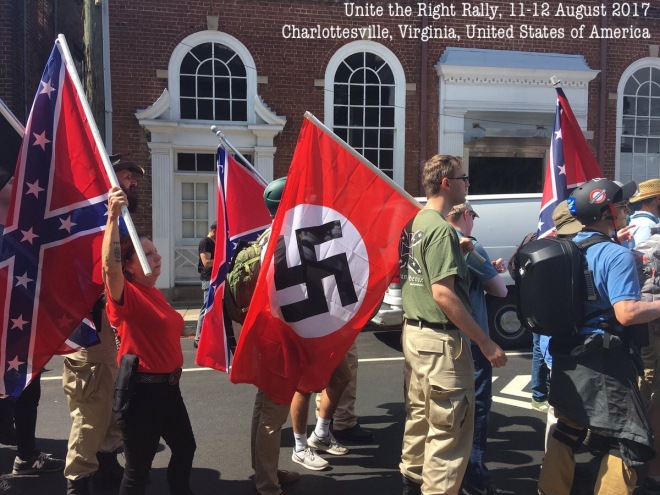 On the same day, on 12 August, one of them murdered 32-year-old Heather Heyer, a native of Charlottesville, and injured many others.

He rammed his car into a crowd of people, including Ms Heyer, gathering to oppose the abhorrent rally of fascists, Nazis, and white supremacists in her hometown.

Heather was a legal assistant at a local law firm, Miller Law. She was passionately engaged with social justice issues and, in her tragically short but loving life, she fought against racism and injustice, and worked to help those in need.

I’m sorry, but these people are not ‘good Southern folks’. Or if they are, the United States has an even bigger domestic problem than we all thought.

These people are fascists, Nazis, and white supremacists. What they unleashed on Charlottesville was domestic terrorism manifested in plain view.

They are racist, anti-Semite, homophobic, ‘I’m trying to make myself more capable of violence,’ deeply disturbed, hateful, paranoid, conspiracy theorists blaming their troubles on a conspiracy by Jews, communists, corporations, the bourgeoisie, ‘criminal ni***rs,’ and the State.

They say they are just trying to ‘express opinions,’ but ‘will f**king kill these people if we have to’. They say they want to remove from society what they see as ‘parasitic vermin,’ ‘degenerate,’ and ‘filth’ – ‘clear them from the streets forever’.

Their comments and ‘opinions’ raise a very important intellectual question: is there a place at all in the public domain for ‘opinions’ imbued with uninformed and ignorant bigotry, hate, prejudice, and racism?

It is an arguable and intellectually sound position to assert that ‘arguments’ and ‘opinions’ imbued with bigotry, hate, prejudice, or racism, by the very nature of those concepts lack the ‘informed’ component and thus have no tangible contribution to make to any sensible argument, or society at large.

In their eyes Ms Heyer was a ‘parasitic vermin,’ and ‘degenerate’ ‘filth’. In fact, their flagship fascist online publication, the Daily Stormer, celebrated her murder. Yes, celebrated … think about that for a while.

Sadly, we can’t presume that Australia is immune from this serious social problem, as just yesterday opportunistic white supremacist posters, produced by Australian neo-Nazis, targeted high school students in Melbourne, and this comes on the back of recent similar incidents at universities.

Fascism, Nazism, and white supremacy are not thoughtful or peaceful political and social movements.

These are not ideologies you could reason with either, because hate and ignorance are incapable of rational thought.

History shows us that once they mature into a mainstream political and social movement, they are the perfect storm of hate, ignorance, and violence.

There are no moral equivalency arguments, or moral grey areas, here when it comes to confronting these failed and hateful ideologies.

Fascism, Nazism, and white supremacy are anti-human and anti-social. They must be confronted head-on, and stamped out.

And make no mistake, they are sensing, and trying to take advantage of, the opportunity that comes from the cultural, political, and social disenchantment that’s spreading across Western liberal democracies.

Sadly, some self-interested, amoral politicians, both abroad and closer to home, also sense an opportunity in exploiting fascism, Nazism, and white supremacy to further their own political ambitions, and are deliberately creating a feedback loop that in turn offers a veneer of legitimacy in the eyes of some who are looking for easy answers.

And nothing’s easier than hate and ignorance. They require zero effort.

This further encourages fascists, Nazis, and white supremacists to step out of the shadows, organise, and try to present themselves as a legitimate alternative, but they are anything but.

Anyone who flirts with these ideologies plays with fire. Literally. Sadly, it’s rarely those who are responsible who get burnt by the fire …

I’m not naïve enough to suggest that our economic and political systems are not showing signs of degeneration and failure, but history strongly advises that fascism, Nazism, and white supremacy are not the answer.

And no, condemning fascism, Nazism, and white supremacy doesn’t require one to be a ‘leftie,’ or a communist. Only human.

While freedom of speech and expression are fundamental to healthy liberal, progressive, and secular democracies, fascism, Nazism, and white supremacy have permanently lost any veneer of ‘legitimacy’, and the ‘right’ to express their ‘ideology’ freely a long time ago.

Our reverence for freedom of speech and expression of ideas cannot and must not be exploited and perverted to reanimate such ideologies, rightfully confined to the graveyard of intellectually bankrupt and inherently evil concepts, because they historically proved themselves irretrievably evil, and an existential threat to peace, humanity, and progress.

Freedom of speech must continue to accomodate the continued discussion of these ideologies, concepts, and ideas from a historical perspective, in the appropriate academic context.

But not the spouting of these toxic, failed, and murderous ideologies in the streets, carrying their vile symbols of hate, without context, rebuttal, or challenge, as a suggested model for organising our societies at the dawn of the 21st century.

Doing so is nothing less than an abuse of the principles of democracy, liberty, and free speech, an abdication of our very humanity, and a perverse ignorance of history’s painful lessons.

And that’s why Donald Trump’s position on what had happened in Charlottesville, Virginia is not just beyond the bounds of common decency, but also offends our very humanity and intelligence.