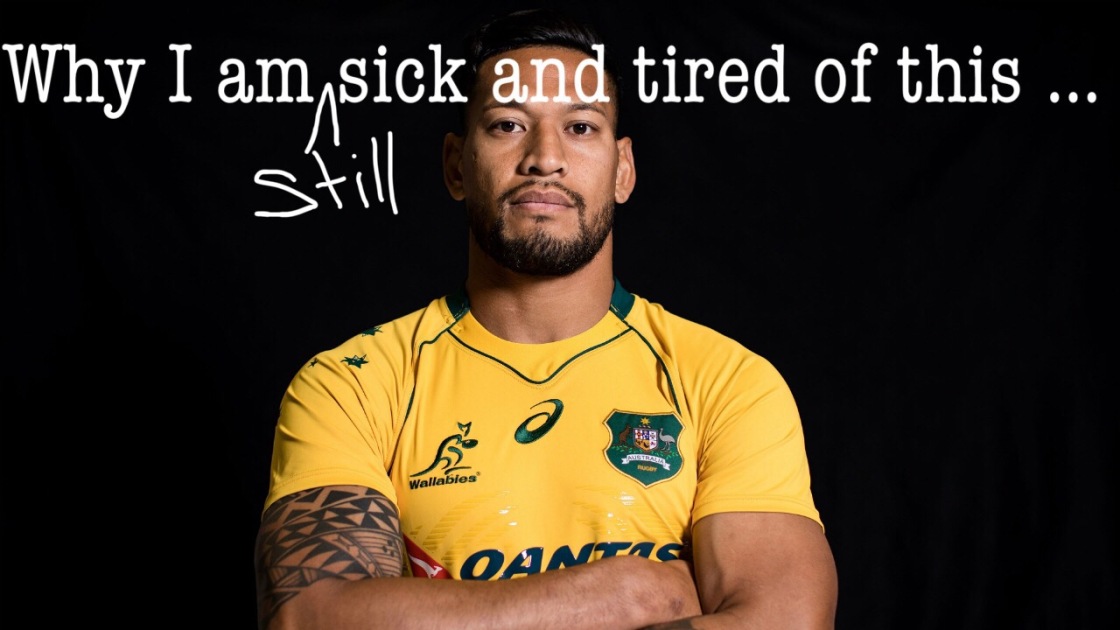 Why I am still sick and tired of this … 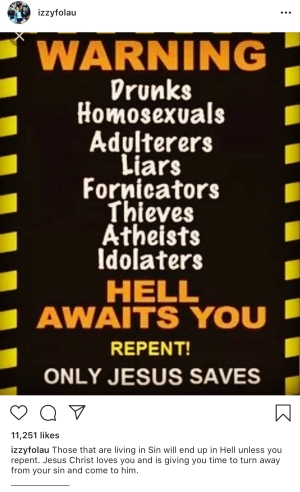 At the very, very serious risk of repeating myself ad nauseam, of course, Israel Folau is entitled to have a personal opinion and belief, although an ‘opinion’ in the absence of evidence and credible facts, and a reasoned and logical argument, to support it is usually nothing more than bigotry, hatred and prejudice, and such ‘opinions’ have no value in the public discourse.

You are only ever really ‘entitled’ to what you can coherently and logically argue and factually support.

However, when Folau uses his public profile to publicly spout a disgusting, ignorant, and harmful view, it becomes a public health and safety issue, and that’s a concern to society.

While he is ‘entitled’ to express his extremist, fringe interpretation of his ‘faith’ (although strictly speaking Australians do not have a constitutional right to freedom of speech, we only have an implied freedom of political communication, certain applicable international human rights treaties which enshrine the right to freedom of opinion and expression, and a cultural and social tradition of speaking our minds freely), we are also entitled to express our fatigue with tired old ignorant, medieval prejudices being selectively and hypocritically regurgitated time-and-time again on public forums designed to hurt, denigrate, and humiliate others in the name of a ‘loving god’ …

Arguably, it is our intellectual duty to respond, and highlight the nonsense in such illogical and unsubstantiated faith-based assertions.

Just replace ‘homosexuals’ with people of colour, or people of the Jewish faith, and see what happens!

Especially as when it comes to people of colour, good Christians once considered them to be without soul, some still do today, and bound for hell as a consequence – much ugliness in our human history has been explained by the hypocritical and politically motivated interpretation of the bible and other religious texts, including slavery.

So-called ‘free’ speech may be considered by many a ‘right’, subject to the fact that strictly speaking actually it isn’t in Australia but, even if so, it is never an unfettered or absolute right, not even in the US contrary to popular belief, and also comes with corresponding responsibilities … and consequences.

Just ask Yassmin Abdel-Magied, or former SBS sports reporter Scott McIntyre, fired because his controversial tweets were in breach of the broadcaster’s social media policy and code of conduct (McIntyre’s unfair dismissal case ended in a confidential settlement, but he was not re-employed).

Here we also have the very practical issues of Folau’s employment contract under which he would have very specific obligations, and the Rugby Australia Code of Conduct which, among other things, provides:

‘1.3 Treat everyone equally, fairly and with dignity regardless of gender or gender identity, sexual orientation, ethnicity, cultural or religious background, age or disability. Any form of bullying, harassment or discrimination has no place in Rugby.
…
1.6 Do not make any public comment that is critical of the performance of a match official, player, team official, coach or employee/officer/volunteer of any club or a Union; or on any matter that is, or is likely to be, the subject of an investigation or disciplinary process; or otherwise make any public comment that would likely be detrimental to the best interests, image and welfare of the Game, a team, a club, a competition or Union.

1.7 Use Social Media appropriately. By all means share your positive experiences of Rugby but do not use Social Media as a means to breach any of the expectations and requirements of you as a player contained in this Code or in any Union, club or competition rules and regulations.’

We recently learned the hard way, from the Royal Commission into Institutional Responses to Child Sexual Abuse, how we failed to protect generations of our young from the hypocrisy of religious institutions – let’s not fail another generation out of misplaced, historical reverence for institutions, ideologies, and individuals whose attitudes and morally dubious and intellectually bankrupt world-views belong in history’s dustbin …

But blind faith is ignorance with no room for reason.

While I support freedom of religion, I think we need to establish what that freedom entails exactly.

It is a freedom designed to enable people to observe their personal and private faith without persecution, but it must not be permitted to include the right to use one’s faith to publicly denigrate other people who do not prescribe to the tenets of that faith.

Otherwise we make a mockery of both freedom of religion, and the fundamental principles of our secular, liberal, and egalitarian society.

We live in a secular, liberal democracy and we are equally entitled to freedom from religion, and for religion not to be used as a weapon to attack others.

In a modern, liberal, secular society, rights that protect intellectual constructs, no matter how historically sacred such as religion, must bow to the dignity, and inalienable human and civil rights, of actual people.

Consequently, rights attaching to religious beliefs and political ideology must submit to the actual human and civil rights, and dignity of women, LGBTI people, people with disability, people of colour, etc.

I understand religion provides comfort, and gives strength, to millions around the world. While religion can be misused, and people’s faith manipulated, I also believe most religious people are good, and have honourable intentions.

However, in a secular, liberal democracy religious freedom cannot be an unfettered, absolute right:

Religious institutions and people of faith must observe the separation of church and state, and abstain from interfering in politics and public policy. Only public policy:

Such policies will arguably also always satisfy the fundamental principles of religious faiths, without importing the prejudices developed and retained by their institutions over the centuries.

As for the question of ‘tolerance’ towards Folau, and his ilk, Karl Popper’s paradox of tolerance comes to mind.

He went on to say that: ‘[i]n this formulation, I do not imply, for instance, that we should always suppress the utterance of intolerant philosophies; as long as we can counter them by rational argument and keep them in check by public opinion, suppression would certainly be unwise. But we should claim the right to suppress them if necessary even by force; for it may easily turn out that they are not prepared to meet us on the level of rational argument, but begin by denouncing all argument; they may forbid their followers to listen to rational argument, because it is deceptive, and teach them to answer arguments by the use of their fists or pistols. We should therefore claim, in the name of tolerance, the right not to tolerate the intolerant.’
(The open society and its enemies, Vol. 1, Karl Popper, 1945)