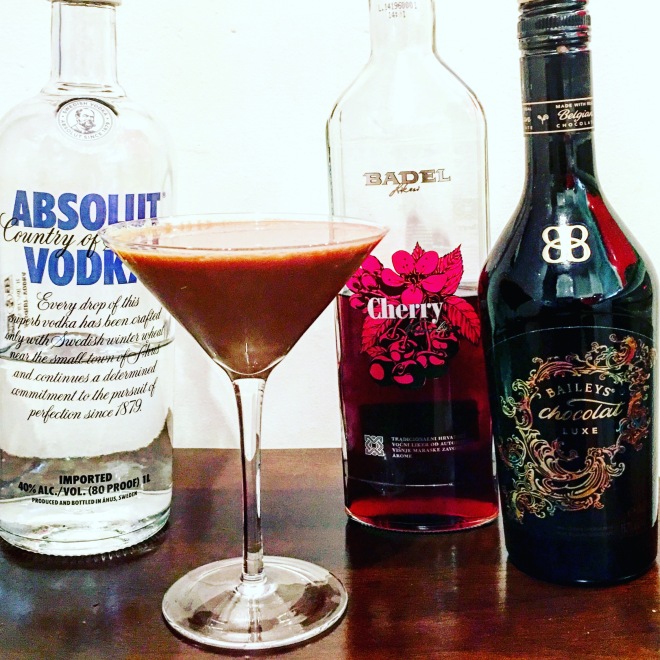 Happy New Year, and welcome back to the first ‘Sunday Life’ of 2017!

Sydney enjoyed a hot and searing summer so far, and it looks like we have some more of it on the way. Beach, sand, and sunshine, the quintessential Sydney experience.

Christmas by the pool with champagne, New Year’s Eve by the harbour with fireworks, Australia Day by the barbecue with friends – Australia at its casual and wonderful best.

This month’s cocktail builds on December’s Cherry Martini by adding a couple of additional ingredients to send you on an enchanted forest journey – the Black Forest that is.

Method: add the ingredients to a cocktail shaker with ice, shake, serve in a martini glass with a maraschino cherry on the stem.

* Again, I recommend Badel’s Cherry Brandy for this cocktail.
*** Baileys Chocolat Luxe has a nice combination of Belgian chocolate, Irish Whiskey, and cream, that adds extra flavour.
*** Absolut has a clear, crisp taste which makes it a great mixer.

While you are enjoying The Black Forest, here are a few of my favourite tunes I am currently listening to …

It was a tough ending to the year when it comes to celebrity deaths. Especially because there were a few who had profound influence on my life.

George Michael was one of them. WHAM heavily featured on the soundtrack to my teenage years, and him coming out of the closet in 1998 left a huge mark on a generation of gay men.

He was an authentic, brave, and larger-than-life figure, and sadly he left us long before his time.

Faith was his debut solo album in 1987, and the single ‘Faith,’ a catchy pop/rock number, the second single from the album, became a timeless, monster hit.

The passing of Carrie Fisher and Debbie Reynolds within a day of each other was a huge pop culture shock. The passing of these two Hollywood icons sent shockwaves through the entertainment world.

Carrie Fisher, as Princess Leia and General Organa, was an icon to generations of Star Wars fans, and Debbie Reynolds was a silver screen legend, actress, dancer, and singer, who even enchanted a new generation of fans on the TV series Will & Grace, as Grace’s fabulously overbearing, and delightfully narcissistic mother.

But did you know that Carrie Fisher had talents well beyond those showcased by Star Wars? After all, she was the daughter of two show business legends, Debbie Reynolds and Eddie Fisher.

Here is a 15-year-old by Carrie Fisher singing ‘Bridge Over Troubled Water’.

And finally this month, that toe-tapping, feel good other hit from the movie, ‘Singing in the Rain’ – ‘Good Morning,’ with the gorgeous and fabulous Debbie Reynolds singing and dancing her heart out … a most appropriate tribute.

When Debbie Reynolds was given this role she had no dance training, and only three months to learn what Gene Kelly had been doing for years. To make things more difficult, Gene Kelly personally opposed her casting in the role, and was an unforgiving choreographer and teacher.

This single scene took a 15-hour day to shoot, her feet were bleeding by the end of the day and she had to be carried off the set. Not that you could tell by the smile on her face, and the incredible performance.

‘Running with Scissors’ by Augusten Burroughs

If you prefer a literary journey with The Black Forest, this month my choice is ‘Running with Scissors‘, by Augusten Burroughs.

This mesmerising memoir, based on the auhor’s childhood, is Burroughs’ second book.

If you have only ever seen the awful movie adaptation, do yourself a favour and read the book. It’s magic.

Burroughs, born Christopher Robinson in Pittsburgh, Pennsylvania, is son of the poet Margaret Robinson who, after her divorce from Burroughs’ alcoholic father, literally gave him away to her psychiatrist. A psychiatrist who later had his licence suspended for having sex with his clients, and encouraging his clients to have sex with each other …

The book chronicles the utterly bizarre period of Burroughs’ life spent living with the psychiatrist and his family in a dilapidated mansion, exposed to psychiatric patients and an entirely unusual childhood.

The memoir was not entirely well received by his own family, nor the family of the psychiatrist who sued Burroughs and his publisher for defamation. While his mother continued to publicly state that she loved and was proud of him, he never reconciled with her.