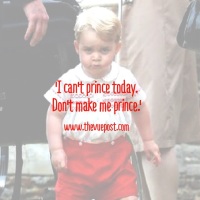 We are not amused!

Actually, come to think of it, I am most amused!

I am a confirmed republican, and have little time for the monarchy and the royal family. But I am making an exception for Prince George, as I am compelled to hand him the quote of the month.

The royals were recently attending the christening of his sister, Princess Charlotte, and it appeared Prince George was really not feeling it. The two-year old became the very human face of royalty, with his near-tantrum appearance on this special day for the family. 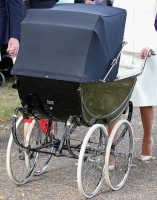 And while on the subject of Princess Charlotte, have you seen that refurbished Millson pram?!

It is the Rolls Royce of prams – but it’s 2015! I suspect the 1960s are calling the royals right now asking for their baby accessories back!

And don’t even get me started on the nanny’s uniform?! But I digress.

In the meantime, Prince George was reportedly overheard saying to his father the words that made me laugh out loud with delight: ‘I can’t prince today. Don’t make me prince.’

It’s difficult to feel sorry for a child born into immense privilege, and wealth beyond imagination. However, that moment illustrated that despite the pomp and ceremony, and crusted on traditions, they are just human beings like the rest of us, put on public display in a gilded cage.

A fabulous gilded cage, but a cage nevertheless.

It also made me wonder briefly if any of the adult royals ever wake up in the morning thinking, ‘I can’t royal today. Don’t make me royal.’ I suspect there will be many more times in Prince George’s life when he will not feel like ‘princeing’.

And while those thoughts amused me no end, I thanked my lucky stars I was born common, and don’t have to put up with any such nonsense …