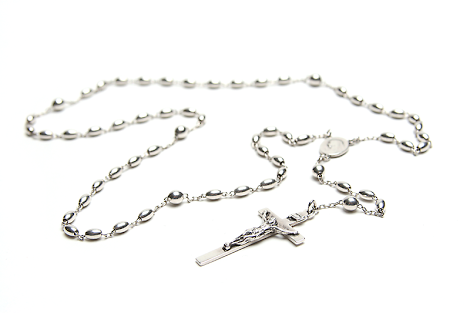 Star Wars and the Lord’s prayer

This week’s nonsense comes to you courtesy of the Church of England.

The Church of England is upset, because three leading UK cinema chains refused to accept advertising from the Church to be shown before the screening on Star Wars, as part of its ‘Just Pray‘ campaign.

Reportedly, Digital Cinema Media, which manages the majority of cinema advertising in the UK, told Arun Arora, the Director of Communications for the Church, that it has ‘a policy not to run advertising connected to personal beliefs, specifically those related to politics or religion. Our members have found that showing such advertisements carries the risk of upsetting, or offending, audiences.’

Admittedly, this was a clever, but failed, attempt by the Church to leech off the popularity of Star Wars, and target a huge and captive cinema audience. It should also be emphasised that this ‘ad’ is actually not as much an advertisement, but rather a very specific Christian religious prayer.

While the Church may be ‘disappointed and bewildered,’ by the loss of such a huge and captive audience, being subjected to such advertising at the cinema is quite different from advertising in other context.

The key aspect of cinema advertising is, that once you settle down into your seat, unless you have an aisle or near aisle seat, you are somewhat trapped, and getting up a walking out of the cinema for the duration of an ad may not be an option. You can’t mute the sound either, so you are potentially left enduring something that otherwise you would have preferred not to be exposed to. And you are paying for the experience!

But to trap me in my seat at the cinema, where I go to be entertained, and then blast the Lord’s prayer at me – that’s a bridge too far.

It may be considered a ‘free speech’ issue by some, but for me it’s entrapment, combined with intellectual torture.

The ‘free speech’ argument can be countered by noting a cinema is a commercial, not a religious, space. When going to the cinema, people pay to see a particular movie of their choice, and to be entertained. To protect that commercial enterprise from complaints, is a commercial decision by a commercial operator.

The operators of the cinemas may have made a very different choice if the ad was to appear before a movie with strong religious themes, as ads are often aimed at specific target markets, and it’s commercially sensible to conclude the Star Wars audience is perhaps not the most appropriate target market for the Lord’s prayer.

Richard Dawkins, famed scientist and atheist, strongly objected ‘to suppressing the ads on the grounds they might “offend” people. If anybody is “offended” by something so trivial as a prayer, they deserve to be offended.’

But perhaps the issue is not so much a question of ‘offence’, but rather the appropriateness of the appearance of proselytising in a commercial space to a captive, paying audience who are there for a very different reason.

My objections to this ad would be alleviated if people attending the movie were warned about a Christian, or any other, prayer being part of the preceding advertising, so I could then make a conscious choice about sitting through it, or avoiding it.

I would certainly appreciate, and expect, to be given that choice given the nature of the ad – not just for the sake of the non-religious, or people of other religions, who may not wish to participate in a Christian prayer, but for the many thousands of people who have been subjected to sexual abuse at the hands of clergy and may have a painful association between their personal experiences and this particular prayer, which could then act as a psychological trigger for them.

And if anyone truly desires to hear the Lord’s prayer, they can duck into a Church service on their way to the movies, or on the way home, or they can recite it to themselves privately, as encouraged by the text itself …

5. And when you pray, do not be like the hypocrites, for they love to pray standing in the synagogues and on the street corners to be seen by others. Truly I tell you, they have received their reward in full.

7. And when you pray, do not keep on babbling like pagans, for they think they will be heard because of their many words.

8. Do not be like them, for your Father knows what you need before you ask him.

9. This, then, is how you should pray:
‘Our Father in heaven,
hallowed be your name,

10. your kingdom come,
your will be done,
on earth as it is in heaven.

11. Give us today our daily bread.

12. And forgive us our debts,
as we also have forgiven our debtors.

13. And lead us not into temptation,
but deliver us from the evil one.’

14. For if you forgive other people when they sin against you, your heavenly Father will also forgive you.